By Admin-BYC on August 26, 2016 in aankondiging, Kirtan, Uitnodiging, Videos

All glories to Sri Sri Guru and Gauranga! 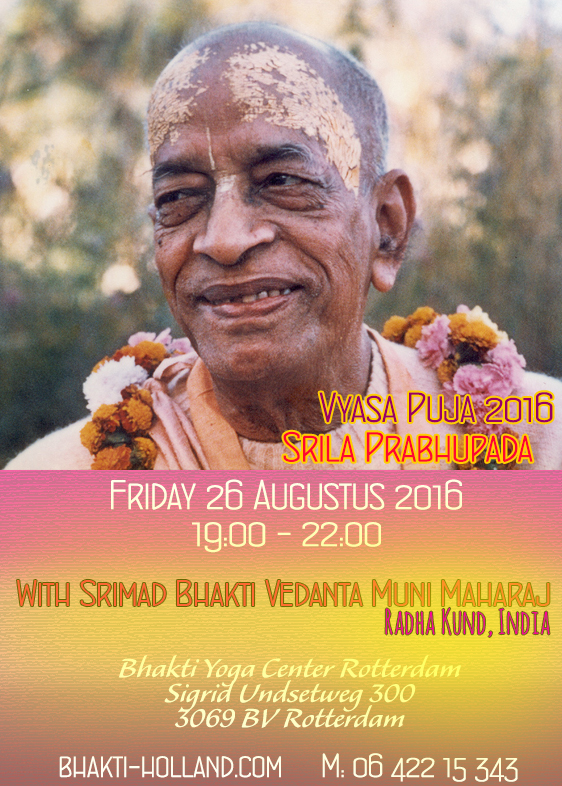 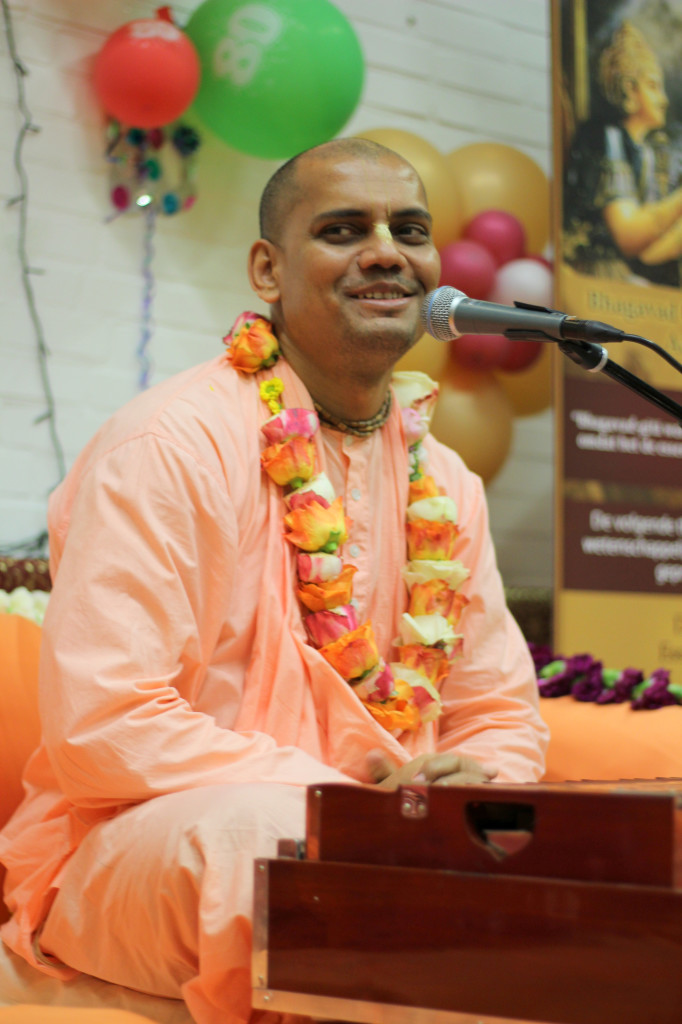 Srimad Bhakti Vedanta Muni Maharaj was born in 1973 in a Gaudiya Vaisnava family in Orissa, India. His parents were high-class Vaisnavas whose mercy from childhood gave him a deep impression in Krsna consciousness. Their house was none other than a Math or temple where aratikas, kirtans, reading the Puranas such as Srimad-Bhagavatam and so on, went on continuously throughout the year. Many high-class Vaisnavas joined there regularly without formal invitation. Therefore, from the beginning of his life, Maharaja had the chance to serve the Vaisnavas.

Bhagavad-gita As It Is

Nevertheless, at the age of twelve, Srila A.C. Bhaktivedanta Swami Maharaja Prabhupada’s Bhagavad-gita As It Is, which was translated into Oriya     by Srila Gour Govinda Swami Maharaja, attracted him towards the worldwide preaching movement of Sri Caitanya Mahaprabhu.

Srimad BV Muni Maharaj came in contact with ISKCON in 1986. Although he had been practicing bhakti-yoga since the age of five, he became an associated member in 1986. At that time his elder brother, who had already joined ISKCON, instructed him to strictly chant a minimum of sixteen rounds daily and observe Ekadasi regularly, in which he followed vigilantly. Even as a student in school and college, where he had to study many hours to keep his career as a good student, he never neglected his spiritual practices. At that time he was looking after one ISKCON Namahatta Center in his village .

After a few years, he could not continue his life with mundane education anymore. Therefore he renounced his study, home and village and came to the lotus feet of his revered Gurudeva, Srila Gour Govinda Swami Maharaja in 1991. Srila Gour Govinda Swami Maharaj was known as a siddha-Vaisnava among the Gaudiya Vaisnavas in Orissa. Srimad Muni Maharaj accepted Harinam initiation from him, which he considered no less than diksa for his whole life. Then he became known as Krishna Prasad Das Brahmachari. He became a full-time devotee residing in Sri Sri Krishna-Balaram Temple of ISKCON under the guidance of Srila Gour Govinda Swami Maharaja. He became part of the traveling sankirtana movement and distributed thousands of Srila Prabhupada’s books. He also joined the padayatra and namahatta programs and traveled all over Orissa at that time.

In 1995 he was put in charge of a department named ISKCON Educational Services to provide spiritual education in schools, colleges and universities. This program was  beneficial for the misdirected youth. Many of them became enlightened to spiritual life and voluntarily sacrificed their life in the line of the Gaudiya Vaisnava movement in order to spread spiritual consciousness throughout the society. Many educationalists, leaders, and administers in society appreciated this preaching program and it became a popular service to society. From time to time he would distribute large quantities of prasadam or spiritual foodstuffs to many poor and neglected children, sometimes in the streets, throughout the villages and in schools. This became an extremely successful program, and many leaders in the society appreciated and contributed to this prasadam distribution program.

After Srila Gour Govinda Goswami Maharaja entered aprakat-lila, or his unmanifest pastimes in 1996, through one of His intimate disciples, Srimati Jagatmohini Devi Dasi, he became directed to have the divine association of the illustrious Vaisnava acarya, His Divine Grace Sri Srimad Bhaktivedanta Narayana Gosvami Maharaja. Mataji Jagatmohini Devi Dasi was not only dear to HDG Gour Govinda Swami, but also she was leading the Namahatta department by the order of His Divine Grace where even brahmacaris respectfully worked under her guidance. Then Srimad Muni Maharaj joined the Gaudiya Math, which is also an ancient devotional movement in the line of Sri Caitanya Mahaprabhu, where subsequently and mercifully Srila Bhaktivedanta Narayana Gosvami Maharaja (affectionately called “Srila Gurudeva”) gave diksa or second Initiation and later the sannyasa order of life in the year 2004 in order to spread the devotional movement all over the world. Thus Srimad Muni Maharaja established several centers in both India and abroad. He gave emphasis to establishing a small group of qualified devotees, spending a lot of time and energy to uplift large congregations of untrained people.

Bringing  the Message of Gaura to Orissa, Bengal and Abroad

Srimad Muni Maharaj has many unprecedented qualities in producing devotional music. He composed hundreds of traditional devotional songs that are widely appreciated around the world. He has given his music and voice to more than ten devotional albums, which are giving inspiration to countless devotees around the world. His albums are in Oriya, Bengali, Sanskrit and Hindi languages. He injects his own unique and creative inspiration into those albums. Without any formal education in music from any academic school or teacher he accomplished his devotional singing and skill in directing his devotional music. He firmly believes his aforesaid talent has been gifted by Sri Guru and Sri Krsna.

Now presently he is traveling extensively in Western countries as well as in India, preaching the message of Srimad Bhagavad-gita and Srimad Bhagavatam by the order of his diksa and siksha Gurudevas. There is some speciality in his preaching that he can speak and sing according to the subject matter in order to invoke an attractive environment amongst the audience. He prefers to present devotional topics in this musical way rather than delivering lectures that are helpful in controlling the unsteady mind. He has translated and published a number of devotional books in the regional language.

Srimad Muni Maharaja for twelve years has looked after his own preaching center, Sri Gour Govinda Gaudiya Ashram. After the aprakat-lila of Srila Gurudeva Bhaktivedanta Narayan Gosvami Maharaj in late 2010, the succeeding years became difficult for him to maintain the Ashram in his separation, and most of the time he stayed in Sri Vrindavan Dham. Therefore he decided to reside in Vraj Mandal in early 2012.

In his ashram “Sri Bhakti Kutir” in Radha-Kunda, the most holy pilgrimage place in the world, Srimad BV Muni Maharaj gives intensive training to bramacharis in serving the eternal divine couple Sri Radha-Krsna. An increasing number of spiritual seekers, new devotees from around the globe come to him for guidance. Upon invitations he travels within India and abroad to spread the message of Sri Caitanya Mahaprabhu.

He continues inspiring people with his preaching activities and his deep soul-searching devotional songs that have become his trademark for the pleasure of Sri Radha-Krishna and his Guru-varga.

There are no upcoming events.